Are you ready, boots?

I own one pair of knee-high boots, which are heavy goth platforms that do up with Velcro (as seen here and here). They’re the only knee-highs I’ve ever tried that actually fit, thanks to that forgiving Velcro fastening. I have 17″/46cm calves and apparently chunky ankles (I can sometimes get wide-calf boots that go round the widest point of my calf, but they almost never fit at the ankle) and I have basically given up on getting properly fitting non-Velcro kneeboots until such time as I can afford Duos.

But I still really want some, and every couple of years I’ll grab a pair off eBay in the hope that maybe this will be the time that the advertised wide calf actually materialises. It never is.

This time round, I contemplated the pair of wasp-ankled boots sitting forlornly on my table and reflected that they were mostly pleather, which compared to multi-layer denim or real leather is a walk in the park in sewing terms …

I don’t have progress photos of these, unfortunately; I did almost all the construction in one go and didn’t stop for pictures. (Confession: this was last autumn. I put the boots to one side to finish up V1419, and didn’t get back to them til now, when I realised they’d go brilliantly with my MyImage M1253 leggings.) They’re fairly basic boots with an elastic side panel (wide-calf fit, hell) and a zip at the inside leg. I took off the decorative buckle, cut a strip out from the centre front, and attached corset tape to the long edges, then added a tongue and small patches to cover various raw corners. The tongue and patch at the bottom of the slit are glued in place, as the sewing machine couldn’t get down there; the rest is sewn.

Perhaps inevitably, I not only laced them irregularly but managed different mistakes on each boot. Ah well. In other news, corset tape is magic. I bought it from Sewing Chest as a 1.5m remnant. Now I know this exists, I am never setting eyelets by hand ever again. The lacing is polyester cord from Minerva, with the ends melted to stop them fraying.

Back view (pretty much unchanged): 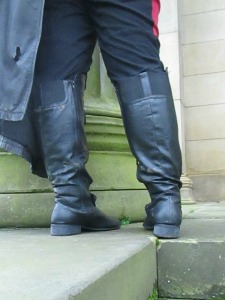 Verdict: HUGE SUCCESS. If anything they’re now a bit big, which means I should be able to get them on over skinny jeans. They crumple at the ankle, but a lot of boots do that. And the corset tape is real coutil, so if/when the boots themselves give out (they were pretty cheap) I should be able to unpick the tape to use again.

I make things and make things up.
View all posts by Craft (Alchemy) →
This entry was posted in sewing and tagged boots, eyelets, finished, refashion, sewing. Bookmark the permalink.

6 Responses to Are you ready, boots?